Some years ago, the Elder Statesman and I decided to amalgamate our libraries getting rid of any duplicates.

Now that we only live 20 miles apart this isn’t an issue at all, and given our different interests there aren’t many times we both want the same book.

This does mean some series of books are split between the two houses. Russell’s three volume set of A pictorial record of Great Western Engines sees volumes 1 and 2 at the Elder Statesman’s house while volume 3 is at mine. Volume 3 being absorbed engines has all the weird and wonderful oddities and NG locos that float my boat but not his.

Similarly, Ozzie Nock’s Locomotives of the 20th Century is likewise split because the Patriarch doesn’t do diesels and electrics.

Occasionally we do want to borrow each other’s books and so it was last night I sent an email saying “when you come for lunch tomorrow can you bring Russell vol 2 and RCTS vol 5?”

They duly turned up today and so now I have some more gleaning of 15xx data to do. 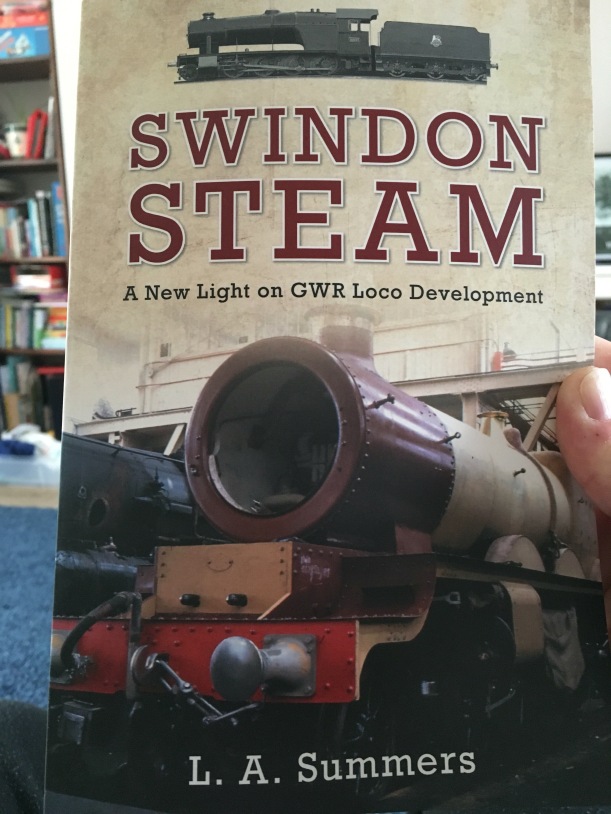 Newly arrived on the reading pile is this volume. I was attracted to it by the description on the back…

“The author reveals the facts about the mythical Hawksworth Pacific, and in the projects that were never progressed, the Stanier-Hawksworth 4-cylinder compound, the express passenger Pacific tank of the early 1930s, the wide firebox 2-8-0 based on the LMS 8F, the coal fuelled gas turbine, the Caprotti County and the one that was completed – Dean’s express passenger 4-2-4T, only ever to run a few yards outside the works.”

All my sort of stuff and lots of ideas for years to come. Having flicked through it I’m sure it’ll destroy all the romantic ideas I have about the Hawksworth Pacific but I’m sure the detail of it and the others will make up for it.

Time to make a cup of Yorkshire, put my feet up, and get reading.

With the flurry of news about the return of Flyibg Scotsman, I thought I’d have a quick break from modelling to ask a question or two about preservation policies.

Personally I don’t like Scotsman. It’s like a bloke in a flashy car or a woman who’s wearing a low cut top. It says look at me but it really isn’t that special. It was widely reported by crews back in the day that it was a bag of nails. I wonder if the publicity department of the LNER got confused. All the loco crews were going round in amazement that Scotsman could actually achieve 100 mph and so they made it a news story thinking it was some big deal to reach 100. The fact that Papyrus did 108mph shortly afterwards shows it wasn’t actually that big an achievement by such a large loco. 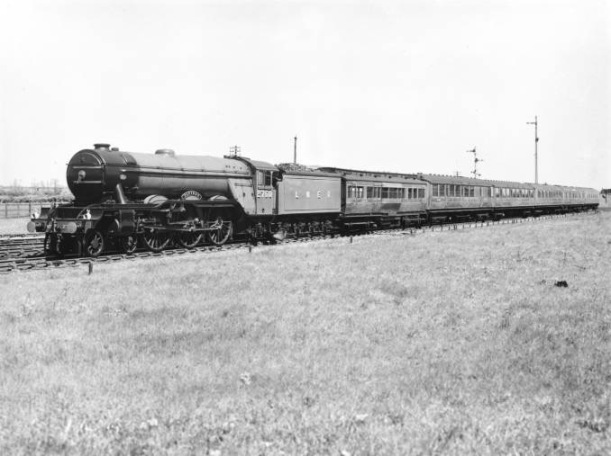 Papyrus on its way to achieving 108mph (c) NRM

The problem I have these days with Scotsman is the fact the NRM have spent a vast quantity of money to restore a loco using as much original as possible but with the intention to run it on the mainline. To me, that’s nuts. With all the recent attention on mainline running following the various West Coast Railways incidents, you can see the day coming where steam is banned from the mainline unless it is new build. And fair enough I say. Tornado is currently the only loco that is built for today’s operating railway. All other locos were built for an operating environment long gone and most are geriatric to say the least.

The NRM has spent a fortune on Scotsman but it will fall apart again in a few years and the day will come when it is too expensive to maintain. Then what will they have preserved? Nothing. The millions they spent they could have built a new one with a much better life span and preserved Scotsman. But instead they’ve got a glittery turd.

Secondly, the NRM also recently unveiled their Eurostar powercar. The problem I have with this is that it isn’t significant. Much of the stock in the NRM is significant – First in class, fastest, oldest, last off the line, etc. This power car is no 3308.

When I saw it it immediately rang alarm bells with me. It’s not that I know Eurostar numbers off by heart or anything but the 33xx Eurostars were the North of London ones which were built for running Glasgow and Edinburgh to the tunnel via the WCML and ECML. They were never used for this and the first 3 sets (6 power cars) were eventually painted blue and used by GNER as additional capacity. 3308 wasn’t even one of those. The last of this sub fleet was named Entente Cordiale and used to transport the Queen to Paris, but 3308 wasn’t in this set either. One of the 33xx Eurostars set the UK speed record. But not 3308. There is nothing significant about 3308 at all.

3308 has only ever been used in revenue service on domestic TGV services in the south of France, yet the NRM have it as an example of the Eurostars that run London – Paris.

(It is also recorded by both the NRM and Eurostar to have been a gift from Eurostar. One hopes SNCF gave it to Eurostar first so they could give it to the NRM…) 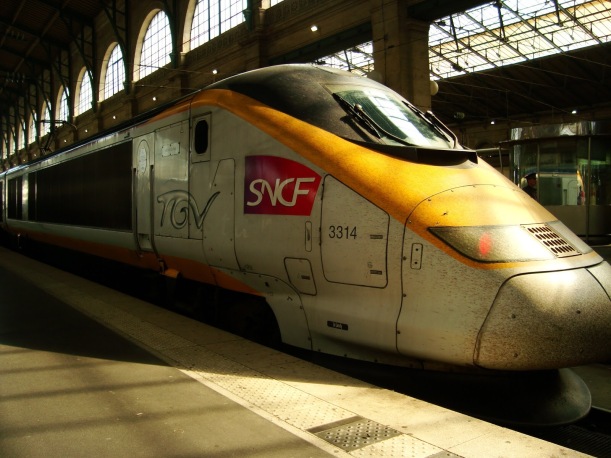 Given that all but 8 of the Eurostar sets are being scrapped, if it were me, I’d have asked for 3313 or 3314 which are the power cars from the set which holds the UK speed record (208 mph) and formed the set for transporting the Queen.

So to summarise from these ramblings, the current NRM policy is:

1. preserve something as original as possible (hence why Scotsman cost so much to restore and why Green Arrow won’t be restored to running condition)

Well, happy new year and all that jazz.

According to WordPress people from 46 different countries visited my blog last year, UK, Australia, and the USA topping the table. So many thanks and I hope you all continue to read my meanderings.

I’ve now been back at work 2 days and although there is shortly to be a flurry of activity that should keep me busy for the next 3 months, right now people are still getting over the Christmas excesses and things are slow.

So while I slip into complete boredom doing necessary but very dull project admin, I am keeping the brain active with an idea. Quite when the idea becomes reality I have no idea but we shall see.

Basically my obsession (I’d call it fascination but I’m sure others will call it obsession so we’ll go with that for the time being) with Hawksworth has made me think I’d like to have his interesting developments as models. 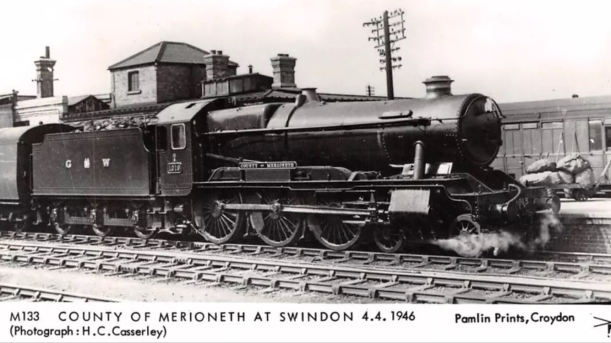 I already have a County and one day I may get a Modified Hall (while procuring plates to turn my County into 1019 Merioneth, I also got ones for 7930 That’s Hall although I think I’d actually prefer Sod Hall or Naff Hall given the chance). 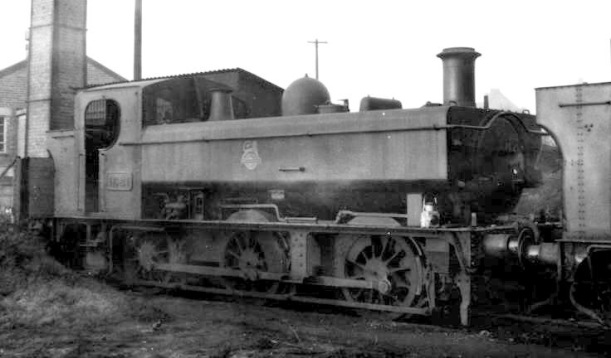 As regular listeners will know I am (and I hope it will happen this year) making the Hawksworth Pacific. I have no interest in making his 16xx which was a bog standard pannier tank, or his 94xx which was really just a bog standard pannier tank with a taper boiler (and anyway Bachmann are to release this soon). However, I do want to model his 15xx. Innovative, different, user friendly, I like this loco. One contributor on RMWeb said it was unusual for the GWR because it had “the spaghetti on the outside”!

Unfortunately, apart from a rocking horse poo like Nu-Cast kit (which even if I found I’m not sure I’d want), there has never been an available 15xx.

However, over the last 2 days, to relieve the project admin boredom, I have come up with a cunning plan. More cunning than a fox with a degree in cunning from Oxford University. It involves using a couple of r-t-r locos to make a 15xx. That’s my kind of modelling. No kit instructions to follow, just a set of problems to solve in the best way I can. I think (he says hopefully) that it’ll be relatively straightforward. 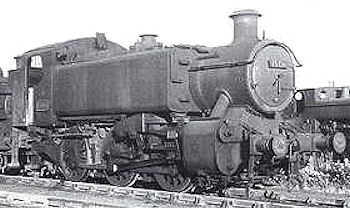 15xx: A masterpiece of user friendliness, how un-Great Western!

At some point I might explain how I intend to do it, but as some famous bloke once said, publicity is the death of innovation, so for now, I’m not telling. Sorry.