The first ever 009 loco I put together was the Peco Glyn Valley Tramway loco kit on a GF chassis.

This certainly added to my student loan…

It probably would benefit from some lining but I still like the result I managed to get with it and Great Gable gets the honour of being loco no.1 on Penlowry. 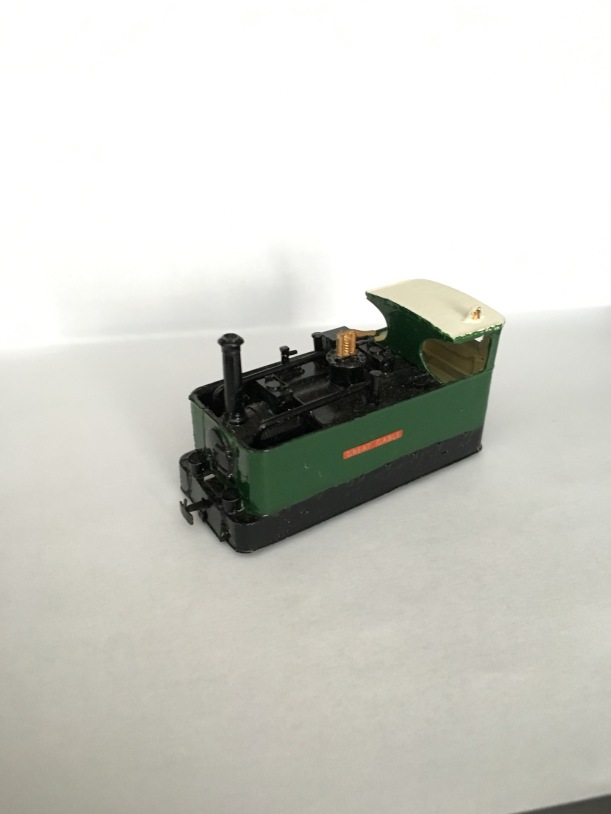 Continuing the look at some of my early work I uncovered recently in my archeological dig through my stuff.

Here are two vehicles I put together. On the right is an oil tank wagon knocked up out of a slate waggon chassis, a capacitor, a vacuum pipe from a standard gauge model to represent the delivery hose, and a lump of leftover white metal from another kit to represent the pump housing.

The other is the FR hearse van but I didn’t like that you couldn’t see the coffin that was thoughtfully provided so I made it with curtain sides. The curtains are made from black paper concertinaed and the wreath is a piece of hedge material.

I have got another hearse van kit so I can make a proper one at some point but I do still like my version.

I’ve just been going through my model railway cupboard. This was mainly because I knew I had a few things I’d bought which I knew I’d never get round to so I thought I’d whittle them out and eBay them.

In doing so I unearthed my first forays into 009 modelling. This started either just before or just after I’d started volunteering on the Ffestiniog when I was in my first year at university.

In this and probably another two posts I thought I’d share them.

By keeping off the beers for a few nights I could scrape together the monies for an odd model. However being the thrifty Yorkshireman I am I also looked at scratchbuilding.

So having bought and built a VoR carriage kit from Parkside Dundas (picture above)  I then took the measurements and built my own, including scribing the planking. I was smart enough to realise that laminating the sides was the way to go, though it’s not quite to the Boston Largs Works / Dduallt / Bron Hebog standards.

Having made a right hash of the roof of the VoR carriage I didn’t get round to doing a roof for the scratchbuild but following in the footsteps of Rob of Bron Hebog et al I shall rectify both roofs with the appropriate materials, once I’ve drunk the contents.

Although it’s not the finest model, I do intend to finish that carriage as it is the first scratchbuild I ever did so deserves a home. 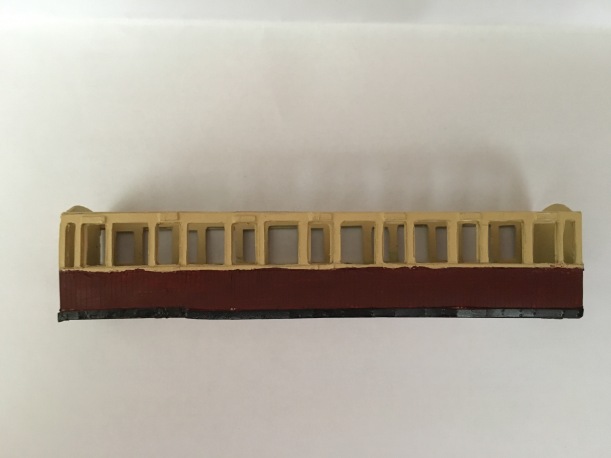 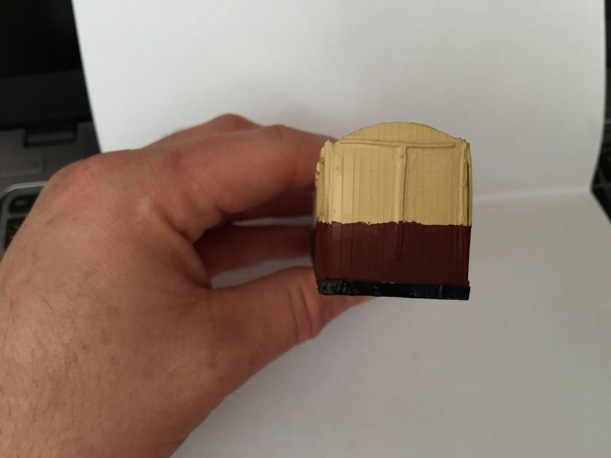 If you read my blog on the Internet, you’ll know the banner picture of my website is the western concourse of King’s Cross. I make no apology in saying I LOVE it. I e talked about it before and I’ll probably do so again.

After seeing the dismal disasters of 1960s office blocks being shoved in front of brilliant nineteenth century architecture (think old King’s Cross or Hull Paragon- see pics below in case you’ve forgotten) it is great to see things being done to rectify it.

King’s Cross is a fantastic example. A new bigger concourse was needed. The result was architecturally, and engineeringly, awe inspiring. I love what the original engineers achieved in their cathedrals – Paddington, St Pancras, Bristol Temple Meads to name but a few but even they would have thought twice at the roof design of the western concourse. 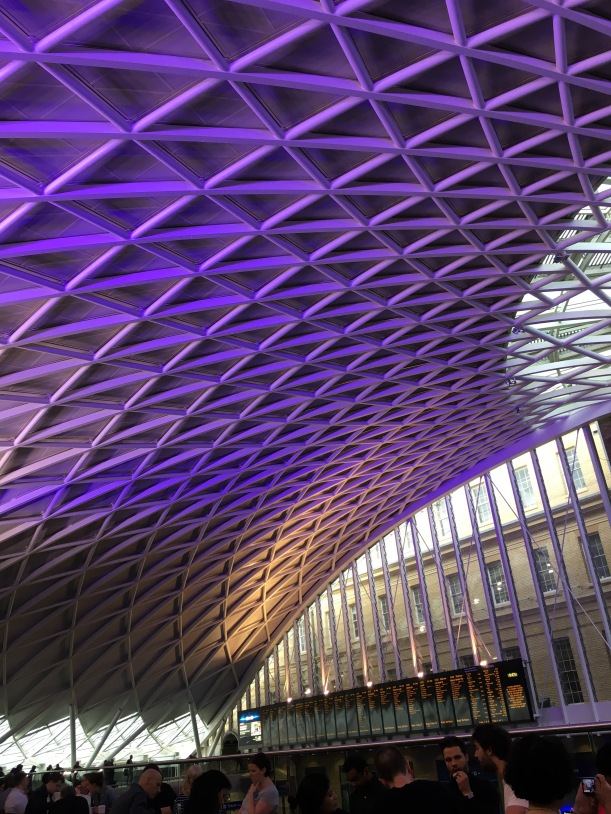 And or course in doing such a good job, they have preserved the architecture of the past while adapting the station for the passenger of the future.

And it is magnificent.

Sitting* in this environment waiting for my train home is no chore.

*sitting was impossible in the old concourse as there were about 2 benches to go round everyone.

Last week the family went on a quick trip to Haworth to collect a cat (yes really). It would have been rude not to visit the Keighley and Worth Valley railway. So we did.

However, it being a summer Sunday, the vintage carriages were out for a play and one thing the Worth Valley do very well is decent trains. Other railways should take note. Of course I totally failed to take any decent photos of the carriages. So instead, here are the chuffers. 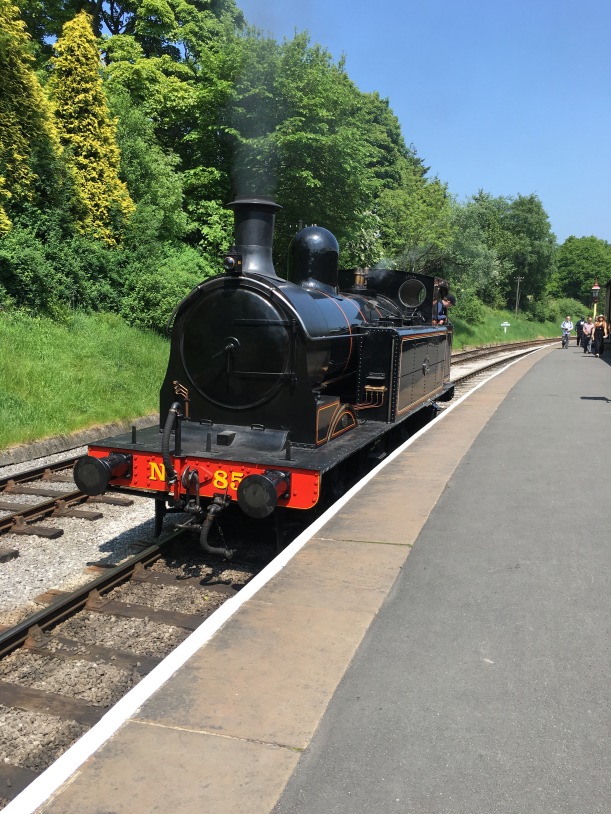 Close up of the lamp.

Yes it is Friday but the title isn’t a comment about what some people get up to on the evening (or all day here in York where the races are on today- oh there’ll be some sights tonight!)

Carrying on my weathering musings, this fence lines the roadside of the road linking the villages of Dringhouses and Acomb, now both suburbs of York, up a ramp to a bridge over the east coast mainline. The ramp runs next to a local sports club and the fence separates the road and pavement from the drop onto the sports field.

The weathering itself is fairly “interesting” showing bare metal, what I presume is red oxide primer, and then the green top layer. It would certainly be a different project to produce a length of it for a model.

However, what is harder to pull off in a model, I think, is the drunken angle of the fence. It’s not that clear in these photos because they were taken while I was on the top deck of t’bus but it’s probably most clear on the top photo at the far left hand side. 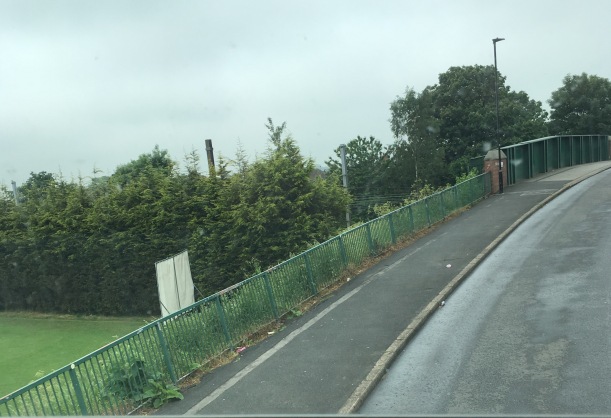 If you modelled the fence as it is I think you’d be accused of doing a right half arsed job of standing it up straight while gluing it down, whereas if you push it over enough to look convincing that it wasn’t a mistake it would look downright ridiculous.

What this photo does show is the cracking in the pavement next to each stanchion caused by the fence leaning over towards the embankment edge. I am tempted to try it on a section of my model one day to see if I can make it look convincing sincere there are very few places in the world where the scenery is as pristine as that found on a model railway.

What is open to debate is whether the angle was caused by the locals leaning on the fence too heavily while watching the fireworks on Bonfire night or a passing car making a determined effort to field a four down at Cow Corner.

This row of houses is close to where I live and have a fine view of the East Coast mainline. The roofs have suffered quite an interesting weathered effect but I just don’t think you’d get away with it in the modelling world – people would think you’d made a right hash of it. As always, truth is stranger than fiction.