The monorail was a late addition to the model railway concept. Early in 2012 my company won a piece of work for me to carry out a condition assessment on Sydney’s monorail prior to its sale to the NSW Government. The Government didn’t want the monorail, only the light rail but the company that ran them both was smart enough to say that if they wanted one, they had to have both.

Opened in 1988 for the Bicentennial celebrations, the system was designed to ferry people from the city to Darling Harbour, the new “place to be seen” in Sydney.

Despite politicians best efforts to claim it could be used for commuting, it had separate (and expensive) ticketing and didn’t link many commuting places.

The condition assessment revealed the poor state of the system and the cost of returning the system to a condition able to continue until 2038 as originally planned was too expensive to contemplate.

This left the Government with little choice but to shut it. Due to the poor state of it (and the light rail) they managed to acquire the systems at a bargain basement price in July 2012 and on 30th June 2013 that last monorail ran (with the usual massive patronage leading to calls to keep it open!)

Cutting up the monorail at Paddy’s Market (C) Hpeterswald

The closure was actually part of a wider plan to redevelop both the Convention Centre (through which the monorail ran) and the light rail (clearing the monorail on Pitt Street allows more traffic on that road which enables the pedestrianisation of George street to happen with reduced disruption). 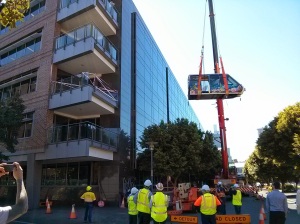 Amazingly, Google bought one of the monorails and had it installed in their office as a meeting room!

Just before I moved to the UK I bought one of the E-R Models monorails in 4mm scale which are based on the Von Roll monorail which is the type Sydney had. 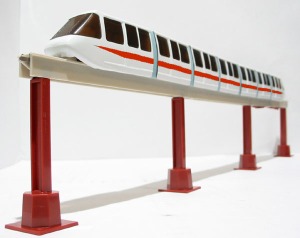 I realised I could incorporate it into my technical centre on the grounds that the RTC did at one time have something similar. In their case it was the world’s first maglev and went into revenue service at Birmingham Airport. It has since been replaced and one of the cars is now at the National Railway Museum.

So that’s why I have a monorail on my layout. I have two railway legacies I left to Sydney when I moved back to the UK. The other was a good one I promise, and I’ll have a model of the result of that once they’ve built one! This particular legacy though was best summed up by this conversation with a family friend:

Family friend: I liked Sydney. We went on that monorail. I told some friends of ours who are going soon to go on it.

Me: Because I shut it.