I’ve got a new favourite. As regular listeners will know I like an oddity. Something off the norm for me is just really interesting. I think it is the designer in me, I like to see the results of other engineers experimenting. Sometimes there are successes, and sometimes there are failures. But if you don’t try, you/’ll never know. My list of “one day in the future” models includes (for example) the LNER streamlined B17/5s. They only did two of them and I think they were probably a pig to maintain, but it was an experiment for publicity – something the modern railways can forget about sometimes.

The list also includes the LNER C7 with booster tender. Booster tenders never seem to have survived much wherever they were tried but I love the experimentation that went into them

My new favourite class is the Consett long boiler tanks. There is something about the way they look, almost narrow gauge in appearance. I also like the ingenuity that went into solving a particular problem. Again, it was an experiment, partially successful, partially not. At high speeds the long boilers, with their firebox behind the back axle made them waggle their arse – a bit like a salsa dancer waggling their hips as they walk. However, the tractive effort packaged into a small locomotive with small wheelbase made them ideal for hauling heavy loads on branchlines with tight curves and steep gradients. So that is what they were used for. Evolved over time, the details of the design changed although the concept remained the same. One remains, preserved by the North Tyneside Steam Railway Association. It has just been returned to steam and looks fantastic. Railway Bylines has just done an article on them in the latest issue (Vol 20, Issue 4, March 2015). Worth a read. 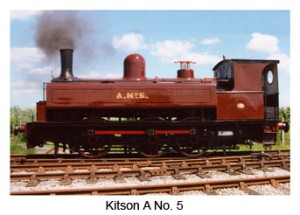